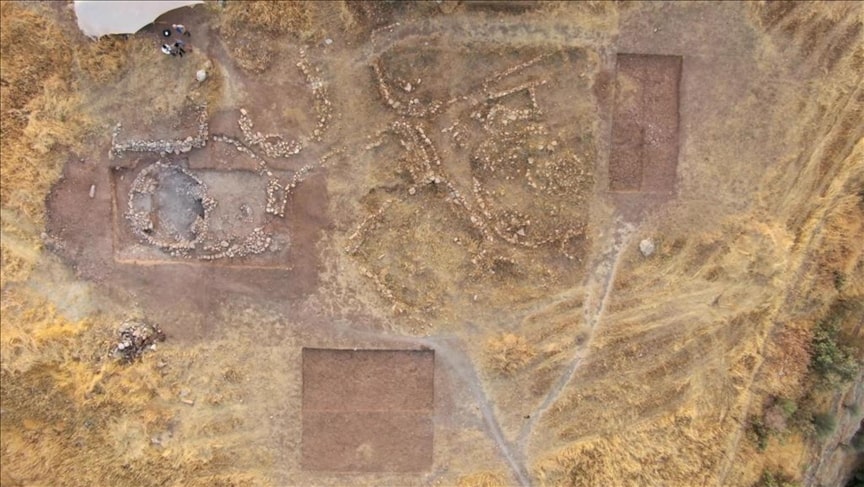 Archaeologists have discovered the remains of a “public building” thought to be 12,000 years old at Boncuklu Tarla in the Ilısu neighborhood of the Dargeçit district of Mardin province in southeastern Turkey.

Archaeological excavations by the Mardin Museum Directorate, which began in 2012, are still ongoing in the area, which has hosted 25 civilizations throughout history, including the Sumerians, Assyrians, Romans, Abbasids, Seljuks, and Ottomans.

Since 2012, many finds from the Epipalaeolithic period to the Late Pre-Pottery Neolithic phase B have been unearthed in the mound, which covers an area of approximately 2.5 hectares.

“An important part of the building, which was built three times one-on-top-of-the-other and dates back to 10,000 B.C., has been unearthed,” said Ergül Kodaş, Associate Professor at Mardin Artuklu University, Department of Archeology, who leads a 15-person team at the excavation area at the Boncuklu Tarla (Beaded Field) site in Mardin province.

Associate Professor Ergül Kodaş told the state-run Anadolu Agency (AA), “An entire building was unearthed. These are large-sized structures that are not residential and have been used by many individuals or groups.”

“Several special structures, which we can call temples, were unearthed in the settlement, in addition to many houses and dwellings,” Kodaş said.

“This is a key finding that could shed light on questions like how people in northern Mesopotamia and the upper Tigris began to settle down, how the transition from a hunter-gatherer life to food production took place or how the cultural and religious structures were shaped,” he said.

Boncuklu Tarla is almost 300 kilometers to the east of Göbeklitepe.

Boncuklu Tarla got its name from the beads found in more than 50,000 excavations. The majority of the jewelry, which was mostly in the form of bracelets and necklaces, was discovered in graves as grave gifts. In comparison to the period, the craftsmanship in jewelry is quite eye-catching.

During the excavations carried out in the area in 2019, a special structure similar to Göbeklitepe but older than it was found.