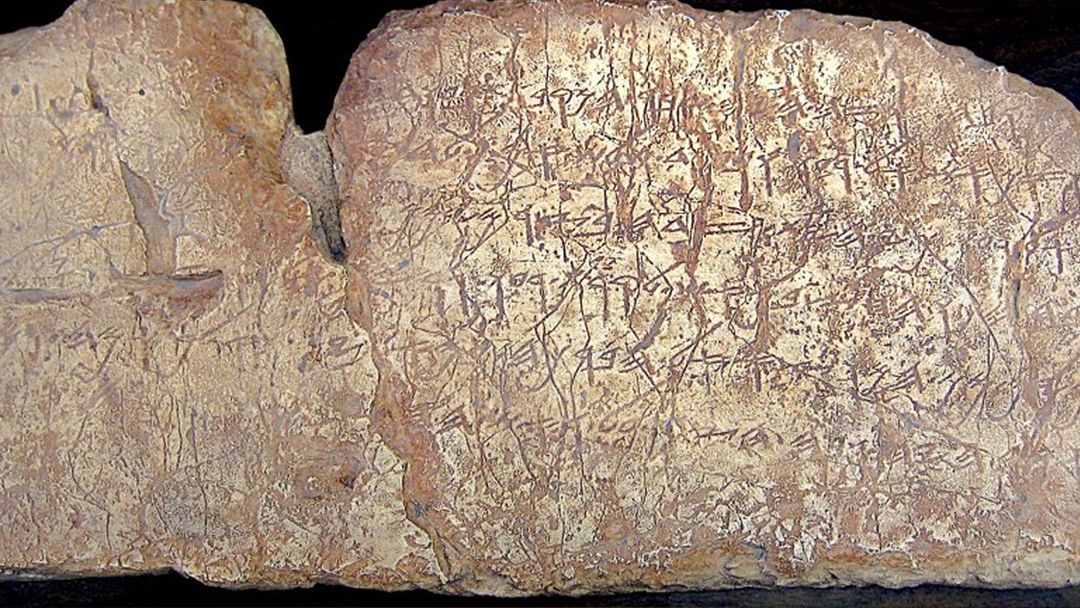 During the visit of Israeli President Isaac Herzog to Turkey, the claim that he wanted the Siloam Inscription, one of the most important inscriptions in Hebrew history, to be returned to Israel came to the fore.

The newspaper Zman Yisrael, which is published in Israel, inflamed the discussions by bringing the Siloam Inscription back to Israel on the agenda.

Zman Yisrael reported that the 2600-year-old Siloam Inscription would be given to Israel, based on the words of an Israeli official. Turkish officials did not make any statement about this news.

The agreement was discussed during the landmark visit of Israel’s President Isaac Herzog to Turkey earlier this week, a senior Israeli official said The Times of Israel (ToI). In return, Israel offered to send Turkey a historical and religiously significant item that is held in an Israeli museum.

There was no confirmation from Turkey regarding this speech.

The Siloam Inscription, which was found near Jerusalem in 1880 and brought to the Istanbul Museum-i Hümayun (Istanbul Archaeological Museums), is a very important document in terms of Jewish history.

The Siloam Inscription is a 2,700-year-old Hebrew text describing the Pool of Siloam and the City of David.

Can the Siloam Inscription of such importance be returned to Israel?

Should cultural assets be found and exhibited in the place where they were born?

Ömer Erbil, Siloam inscription is state property, it is impossible to give it away! The article he wrote in the title also included the following information.

Why is Israel so insistent on the work? What does the Siloam Inscription say? Is this work stolen by us? First of all, this artifact was found in 1880 when Jerusalem was an Ottoman territory at that time. It was brought to the Imperial Museum of the period, the Museum-i Hümayun, that is, the Istanbul Archeology Museum. In Jerusalem, the same-Silvan fountain was found in an underground channel made where the water came out of the rock. It is estimated to be 2700 years old. This inscription, the oldest Hebrew script written in Phoenician script, was inscribed on the rock on the left, near the exit of the canal. The inscription consists of six lines of varying lengths. This inscription described the construction of the tunnel and how the workers worked. Israel does not let go of this inscription, as it proves the experiences of King Hezekiah mentioned in the Torah and the historical ties of the Jews with Jerusalem.

Since the artifact is not stolen and is under protection in the Istanbul Archeology Museum in our country, it is within the scope of the Law on the Protection of Cultural Heritage No. 2863 and it is state property according to the 5th article of the said law, it does not seem possible to give it to another country. Article 32 of the law numbered 2863 prohibits the removal of cultural assets out of our country for purposes other than an exhibition. Opposition to this article is sentenced in Article 68 to a prison sentence of five to twelve years and a judicial fine of five thousand days. While these binding laws exist, it is not possible to transfer artifacts to another country. It was registered as property of the Ottoman Empire and under legal status belongs to the Republic of Turkey.

There was no state named Israel when artifact came to İstanbul

Moreover, Turkey always returns the stolen artifacts to the countries of origin. His works were given unconditionally to countries such as Iraq and Syria. Cooperation with Peru has also been initiated for the Peruvian artifacts, which were recently caught in the warehouse of international smuggler Aydın Dikmen. There is no legal basis for the return of the artifact, which is the property of the state and found on its own soil decades before the establishment of the State of Israel.

The inscription reads: “… this is the story of the tunnel, while [the hewers lifted] their axes toward their counterparts, and while three cubits more were to (be hewn?), was heard the voice of a man calling to his counterpart, (for) there was [a crack?] in the rock, on the right, and on the left. And on the day of [the final barrier’s] piercing, the stonecutters struck each man towards his counterpart, ax against ax, and water flowed from the source to the pool for 1,200 cubits and 100 cubits was the height of the rock, over the head of the stonecutters …”