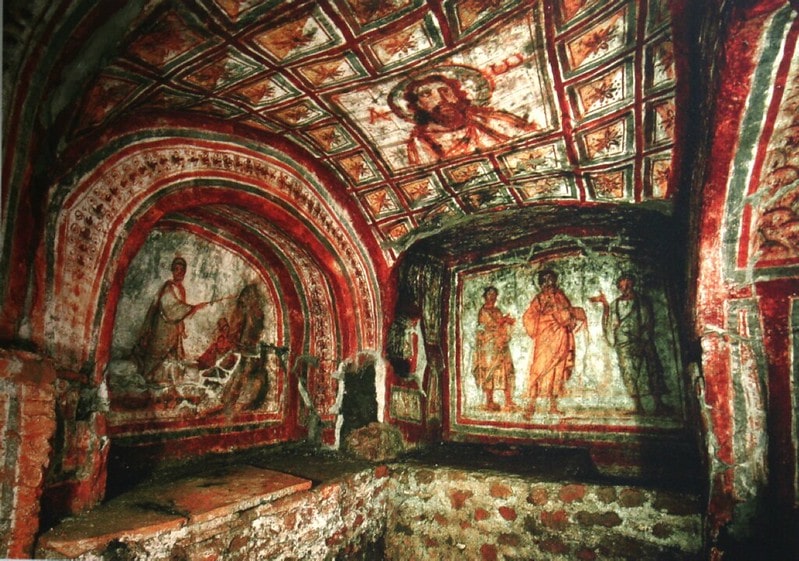 The fourth-century Catacombs of Commodilla in Rome’s Garbatella district will reopen to the public soon after the Vatican’s Pontifical Commission of Sacred Archaeology restored their frescoes.

The catacombs, thought to be named after the Roman matron who donated the site, are located beneath Parco di Villa Giovannipoli, on what was once Via Ostiensis, along Via delle Sette Chiese.

The underground complex, once a pozzolana quarry, is spread out over three levels. The site contains the crypt with the tombs of the martyrs Felix and Adautto, two priest brothers believed to have been killed during the Christian persecution under Emperor Diocletian, about the year 303.

In the underground church, there are frescoes of Christ handing over the keys to St Peter, flanked by St Adautto and St Merita, alongside a depiction of St Paul, St Felix and St Stephen Orante.

There is also a curious graffito inscription dating from the first half of the ninth century – Non dicere ille secrita a bboce – a hybrid of Latin and vernacular Italian that translates as “don’t say the secrets out loud”. Other pilgrim graffiti from different periods can also be seen.

The catacomb’s location was discovered in the eighteenth century, and modern research into it began around the year 1900.

Inhumation replaced cremation as the primary method of disposition for Romans of all religious persuasions starting in the second century AD. The long-standing custom of burying human remains outside of Rome’s sacred perimeter, the pomerium, persisted. Roman tradition allotted space for tombs and open-air cemeteries along roads that emanated from the city, and the creation of catacombs was a result of this custom.

Commodilla is one of between 35 and 60 catacomb sites in the environs of Rome. Some are Christian, while others are Jewish or pagan, and contain the remains of people of different faiths, even within the same family tomb.

The Catacombs of Commodilla are unusual in that they have deep square pits with up to 20 loculi arranged in the walls and stacked on top of each other. This is what sets them apart from other Roman catacombs and is likely a result of their high demand and limited availability.

The exact opening date was not disclosed in the Commission’s statement, nor was it made clear whether the site would be regularly accessible to the public or only occasionally. Five catacombs are currently open daily. Others are occasionally open to the public, while the remainder, including Commodilla, require a special permit, which is theoretically possible but difficult to obtain. To find out how to go about doing that, check out the Commission’s website.