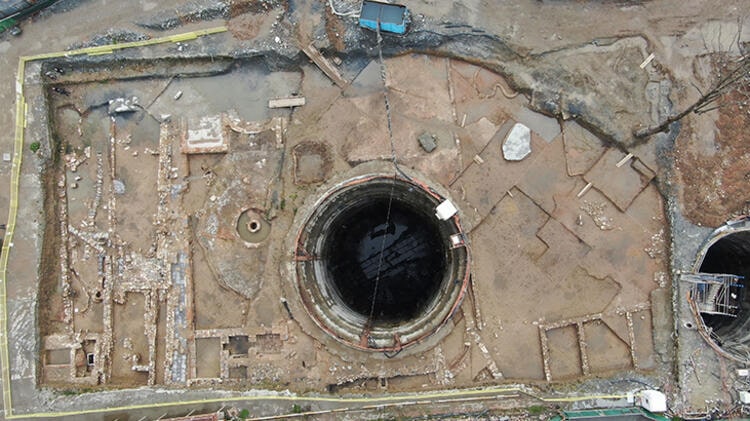 New findings were found in the Kabataş excavations, which started a year ago under the presidency of the Istanbul Archeology Museums Directorate. Archaeologist Mehmet Ali Polat said that “an ancient harbor can be reached in Kabataş excavations.

During the excavations, mosaics with podima floors were found in the area where the remains of Europe’s first canning factory, built at the end of the 19th century. At 4 meters below sea level, small finds from the classical period of the 6th century BC were unearthed. In the continuation of the studies, archaeologists predict to come across the ancient harbor fill.

Archaeologist Mehmet Al Polat said that the Kabataş excavations will be reached an ancient port, albeit of small size, in the region.

Archaeologist Mehmet Ali Polat gave information about the remains reached in one year of the Kabataş excavations in the news published on the Halk TV website.

Archaeologist Mehmet Ali Polat, who explained how they came across ruins in archaeological excavations that lasted for a year, “Here, the building, whose foundations you see right behind me, was built in the late 19th century, in 1891, and has the foundations of Europe’s first canned food factory. Its name is Ermys Canned Food Factory. It seems from historical records that he mostly made tomatoes and peas. This is Europe’s first canned food factory. The second factory is opened to Ayvansaray by the same firm. We found the stone foundations of that canning factory. The factory is actually made of wood on stone and with a hipped roof and a truss roof. Of course, since it collapsed over time, only the foundations remaining under the surface have survived to the present day ”.

A courtyard with a mosaic floor of Podima was unearthed

Polat, who stated that they found the podima mosaic floor belonging to earlier years right next to the factory, said, “There is a large courtyard right next to the canned food factory. This is a podima mosaic-floored courtyard dating back to the 1800s, a little earlier than the factory. There is also an ornamental pool right in the middle of the Podima mosaics. In other words, social space was created. In addition, there are also foundation remains from the late 1700s and early 1800s. Documentation studies of these remains continue. After the documentation and excavations are completed, all of the findings will be presented to the relevant committee. As a result of the decision of the board, the fate of the work here will be determined. In other words, whether they will be lifted, moved or not, whether to go deep or not… ”used expressions.

Stating that they also found small finds from the 6th century BC, 4 meters below sea level, Mehmet Ali Polat said that these finds were taken to Istanbul Archeology museums. Polat said, “Here, there was a depth of 25-30 meters. The subway works are already underway below. If we look at our findings there, after these ruins, we will come across an old harbor fill just after sea level. The oldest data we have obtained there are small pottery and small finds from the 6th century BC, the period we call the Greek period. Probably, we have gone deep here, we will come across with finds from the 5th-6th century BC, from the Roman period, ”he said.