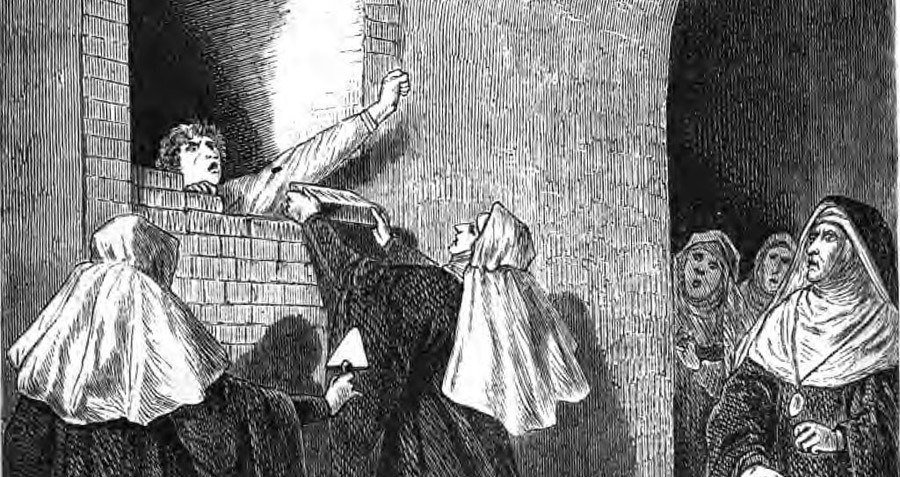 The custom of sacrificing a human being at the erection of a new house or fortress is very old. Foundation stones and beams were laid in human blood the world over, and this disgusting custom was also practiced in Europe until a few centuries ago. However, it is possible to see these and similar traditions all over the world.

Foundation sacrifice refers to the practice of burying a human in the foundation of a new building as an attempt to ensure that it stands. Building buildings is an insult to the spirit and gods of this land. In order to appease them, you must sacrifice. In turn, the sacrifices were transformed by death. They became guardians, destined to guard the building that had become their tomb.

There are many stories of foundation sacrifices from Great Britain to India and Japan to the Balkans.

The horrific procedure has generally been carried out by locking the unlucky soul in a coffin-like box or, in other circumstances, sealing them into some form of wall or other structure.

The common idea associated with this practice appears to have been that such a sacrifice was required to maintain the stability and durability of the construction, whether it was a home, fort, or bridge. The victim was buried beneath a key supporting pillar or foundation stone in order to sustain it. They were buried alive in some situations, or the living individual was shut up in a stone wall; in others, a person was placed in a pit or foundation and murdered by having a massive pillar or foundation-stones placed on him. Ingenious devilry has truly distinguished man’s inhumanity to man.

One of the earliest uses of this tradition dates back to the Roman empire. It is a punishment given to the Vestal virgins, a class of priestesses.

The Vestals were girls from well-to-do Roman households who were thought to be devoid of mental and physical flaws. They had accepted a rigorous chastity vow and dedicated themselves to maintaining a holy fire in honor of Vesta, the goddess of home and family.

If a Vestal Virgin violated her chastity vow, she was to be executed and buried in the city. Spilling a Vestal’s blood was forbidden, and no one was allowed to be buried within the city limits under Roman law, so the Romans had to be inventive.

The Vestal Virgin would be stripped, beaten, dressed in the clothing of a corpse, and then placed in a catacomb or cave. Typically, she would be locked or bricked away with a small supply of food, water, and candles or lamps.

In the Middle Ages, the Roman Catholic Church imposed similar punishments on nuns and monks who violated their chastity vows or voiced heretical beliefs.

There are legends and discoveries of bodies entombed in buildings and bridges dating back to the Middle Ages all throughout Europe. Several folk ballads allude to the usage of a human sacrifice to solve issues in a building project or to bestow power on it.

This situation is also told in the castle of Rozafa, which is an Albanian story. The story begins with three brothers working to lay the walls for a mighty fortress. Every night, at midnight, the ground rumbles and sends the stones tumbling to the ground. An old man approaches the workers and tells them the reason for their trouble: “The castle spirit seeks a human life.” The sacrifice could not be just any person, but someone dear to the builders themselves.

The brothers resolve that, tomorrow, when their wives come to bring them their lunches, they will take the first to arrive and wall her up in the stones of the castle. They swear to each other not to warn their wives so that the selection will truly be up to fate. But that night in bed, the eldest brother whispers the secret to his wife, and so does the second brother. Only the youngest stays steadfast. His wife, Rozafa, comes alone the next day. The brothers seize her and wall her up, only leaving out one stone, so that she can nurse her infant son through the gap.

On the hill above Shkoder, a gloomy, ruined citadel still stands, frowning over the city. This is Rozafa Castle, named for the woman who, according to legend, was murdered so that the walls would stand to the end of time. They say the stones are still wet with her tears.

The practice of foundation sacrifice has continued to be applied by changing its shape over time. An empty coffin buried beneath the home may serve as a substitute for a body. You may also use a rope to measure a person’s height and bury it. Eggs, candles, bottles of wine, coins, and decks of cards have all been employed as sacrificial replacements in the abstract.