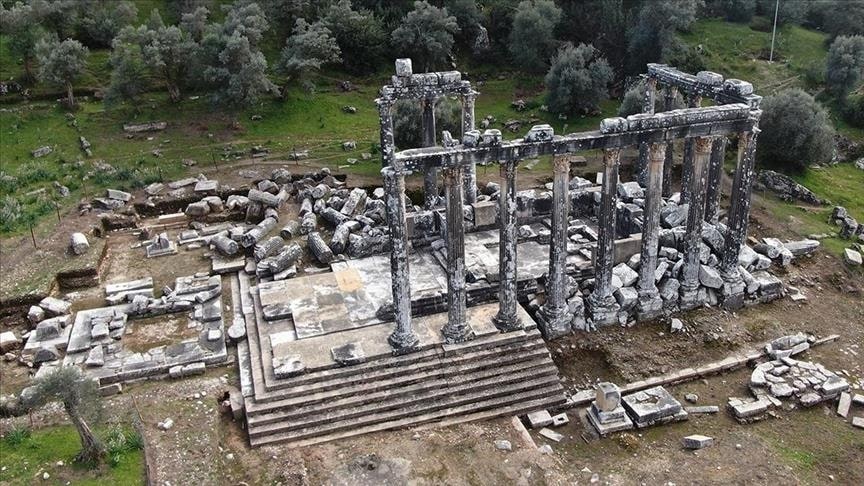 The city in the region called Caria was known from the 5th century BC as Cyramos (Hyramos). During the reign of King Mausolus of Halicarnassus (4th century BC), the city was subordinated to Milas and lost its independence. At the same time, its name was changed to Euromos (meaning “Strong”), which resulted from the Caria Hellenization program implemented by Mausolus.

A Turkish excavation team is doing careful work to unearth a temple of Zeus in the ancient city of Euromos, a short distance from the city of Bodrum on the Turkish Riviera.

Speaking to Anadolu Agency, Abuzer Kizil, an archaeologist at Mugla Sitki Kocman University in southwestern Turkey near the Aegean, said that they brought artifacts to the surface in excavations they started in 2011, and aim to bring more historical remains to light.

Saying that cleaning, drilling, mapping, and excavation has been carried out in the ancient city’s temple, agora, theater, bath, and city walls in recent years, Kizil said Euromos’ location makes it “among the luckiest ancient cities of Anatolia.”

Kizil said that Euromos is one of the important cities of Caria, adding that they are planning important projects for the temple.

He said the local temple to the ancient Greek god Zeus is one of the best-preserved temples in all of Turkish Anatolia.

Kizil said that initially, they did partial excavation and cleaning work in the temple and documented the same area, adding that they prepared a project for serious restoration.

After funding comes through, the work will begin, he explained.

He said to address one of their biggest problems, a slope at the north facade of the temple will be re-done and strengthened in case of an earthquake.

“The Temple of Zeus will take its rightful place,” he said. “It will be one of the best, most interesting, and most-visited temples in Anatolia.”

He underlined that they want to preserve the materials they unearthed during years of work, underlining that the site has great importance for promoting the region and tourism in Turkey.

The Temple of Zeus Lepsynos was built in the 2nd century BC, near Selimiye in Milas District.

In recent years, special work has been initiated to include the ancient city of Euromos, which includes Zeus Lepsynos, one of the best-preserved temples of the ancient period, built in the 2nd century BC, to the UNESCO World Heritage Tentative List.