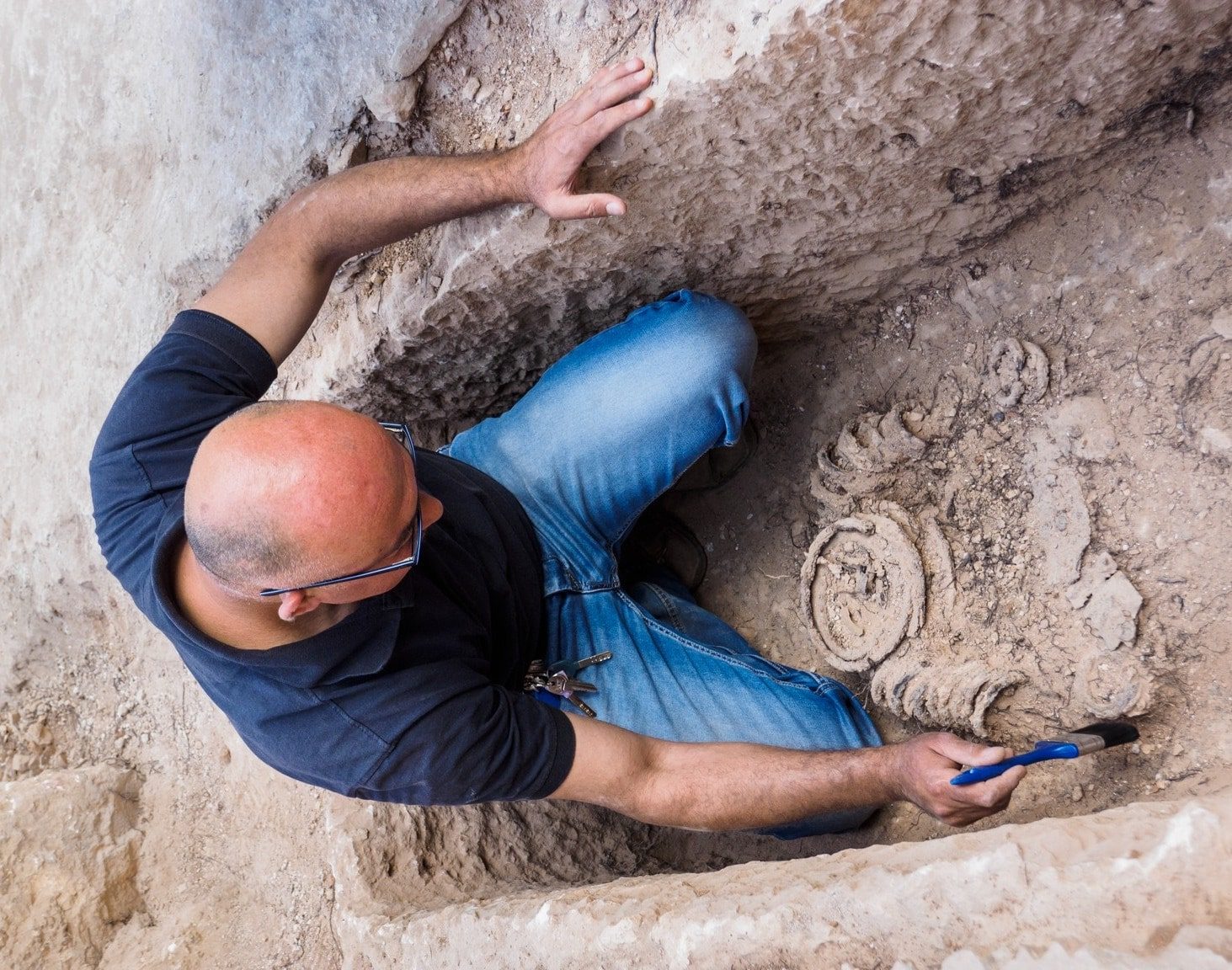 A skeleton chained with iron rings was discovered at Khirbat el-Masani, about four kilometers northwest of Jerusalem, along the ancient route connecting Lod with Jerusalem via Nebi Samuel/Nabi Samwil.

The 1500-year-old skeleton, chained with iron rings, belonged to a Byzantine monk. No doubt, he wanted to achieve a very special goal and he indeed did it.

In the pursuit of salvation, atonement for sin, or spirituality, ascetic monks led a life marked by abstinence from sensual pleasures. More extreme forms of asceticism included self-inflicted pain and voluntary suffering, chaining the body to rocks or keeping it in a cell, praying seated on a pillar in the elements, and solitary confinement.

Archaeologists from the Israel Antiquities Authority previously discovered a tri-apsidal Byzantine-era church at Khirbat el-Masani, which was once a part of a monastery with a road inn for passing pilgrims.

The church is partly rock-cut and built using limestone ashlars (finely dressed stone), which may have been dedicated to Saint Zachary by the priest Sabinus.

In the past, the site was surveyed in the Jerusalem Survey Map, and a small excavation was conducted by the Israel Antiquities Authority archaeologist Dr. Gaby Mazor, exposing the front part of two of the apses.

An extensive excavation carried out at the site in 2017, directed by Israel Antiquities Authority archaeologists Zubair Adoi and Kafir Arbiv and funded by Moriah Jerusalem Development Corporation, uncovered a large architectural complex, comprising the monastery and road-inn and, most prominently, the church, enabling an understanding of the plan, construction methods and the date of the church.

Archaeologists recently found the skeleton of a monk, chained with iron rings around his neck, hands, and feet, was discovered in a cist grave next to two small niche-like closed cells in the central apse of the church. The interred was probably an ascetic monk living in or near the church compound, who bore the chains as part of his devotion.

The practice originated in Syria in the 4th or 5th century AD, but the discovery of the burial shows that during the Byzantine period, this form of extreme asceticism spread as far south as the Jerusalem region.

While the discovery of a chain-clad skeleton is extremely rare in the region, an Israeli Antiquities Authority archaeologist Elena Kogan-Zehavi made a similar discovery in 1991 at Khirbat Tabaliya (Givat Ha-Matos), located between Jerusalem and Bethlehem.