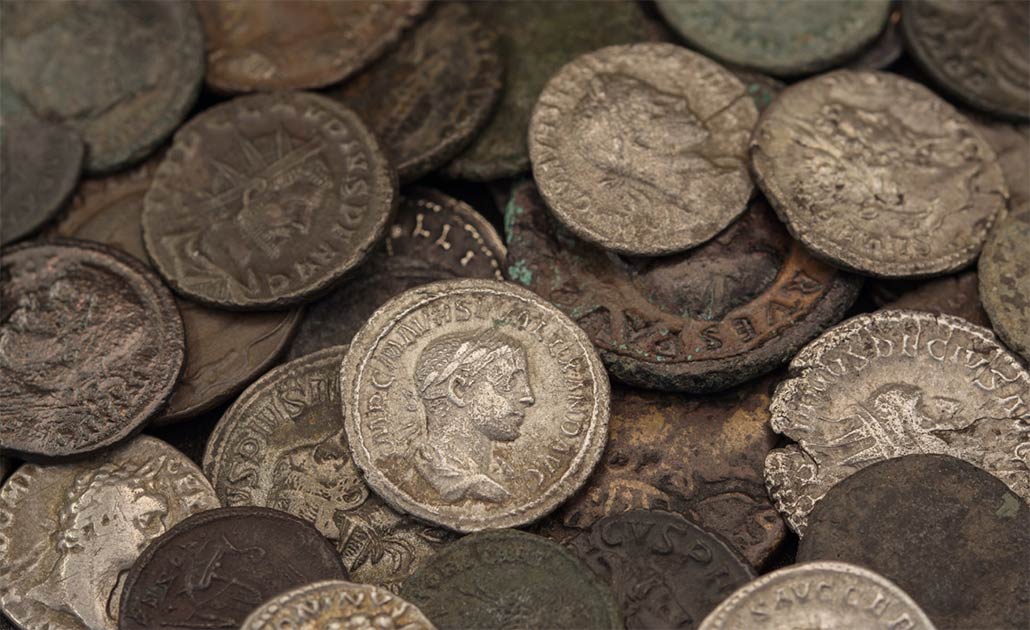 New scientific analysis of the composition of Roman denarii has brought fresh understanding to a financial crisis briefly mentioned by the Roman statesman and writer Marcus Tullius Cicero in his essay on moral leadership, De Officiis, and solved a longstanding historical debate.

Researchers at the University of Warwick and the University of Liverpool have analysed coins of the period and revealed a debasement of the currency far greater than historians had thought, with coins that had been pure silver before 90BC cut with up to 10 per cent copper five years later.

Dr. Ponting at the University of Liverpool said: “The Romans had been used to an extremely fine silver coinage, so they may well have lost confidence in the denarius when it ceased to be pure. The precise level of debasement might have been less important to contemporaries than the mere realisation that the coin was adulterated and no longer made of true ‘silver’.”

Professor Butcher at the University of Warwick said “The discovery of this significant decrease in the value of the denarius has shed new light on Cicero’s hints of a currency crisis in 86BC. Historians have long debated what the statesman and scholar meant when he wrote “the coinage was being tossed around, so that no one was able to know what he had.” (De Officiis, 3:80) and we believe we have now solved this puzzle.”

The reference is part of an anecdote describing self-serving behaviour by Marius Gratidianus, who took credit for a proposal for currency reform worked out jointly by the tribunes and the college of praetors and became hugely popular with the public as a result.

But what was the cause of the coinage being ‘tossed about’, and what were the solutions for which Gratidianus took credit?

Rome and the Coinages of the Mediterranean 200 BCE – 64 CE, a five-year research project funded by the ERC aims to increase our understanding of the economies of classical Rome and other Mediterranean states by analysing the composition of their coins and cross-referencing the findings with the historical record.

Dr. Ponting said: “Our minimally invasive sampling technique used to take samples from these important coins has revealed a significant decline in the value of the denarius – from being a pure silver coin, the denarius first dropped to under 95% fine, and then it fell again to 90%, with some coins as low as 86%, suggesting a severe currency crisis.”

Professor Kevin Butcher explains the context: “In the years after 91 BC, the Roman state was in danger of becoming bankrupt. The Romans were at war with their own allies in Italy, and by the conclusion of the war, in 89 BC, there was a debt crisis.

“By 86 BC there appears to have been a crisis of confidence in the currency, too. Cicero related how the Roman tribunes approached the college of praetors to resolve the crisis, before Gratidianus claimed sole credit for the collective effort.

“One theory is that Gratidianus fixed the exchange rate between the silver denarius and the bronze as (which had only recently been reduced in weight). Another is that he published a method for detecting fake denarii, and so restored faith in the coinage.

“Unfortunately, Cicero’s choice of words is too obscure for historians to determine exactly what was going on. His purpose in writing about it wasn’t to illuminate monetary history; he was just using the incident as an illustration of a Roman magistrate behaving badly by taking credit for the work of others.

“It has long been thought that there was a very slight devaluation of the denarius between 89-87; but was it enough to trigger a currency crisis?”

The results of the metallurgical analysis suggest that the financial difficulties experienced by Rome in these years led to a relaxation of standards at the mint in 90 BC, with the result that the silver content of the coinage declined in two stages, so that by 87 BC the coinage was deliberately alloyed with 5-10% copper.

Professor Butcher added: “This could be the meaning of Cicero’s words: that the value of the coinage was ‘tossed about’ because nobody could be certain whether the denarii they had were pure or not.

“It is all the more noteworthy that around the time Gratidianus published his edict, the standard of fineness rose sharply, reversing the debasement and restoring the denarius to a high-quality currency.

“Although the precise chronology remains uncertain, the new scientific data suggest that it could have been the main aim of Gratidianus’ edict, rather than something to do with exchange rates between silver and bronze or detecting forgeries.”

In the decades that followed, the Romans avoided debasing the denarius again, until the state once again faced huge expenses during the civil war between Pompey and Julius Caesar. Even then, the Roman mint did not go as far as it had in the time of Gratidianus.

These findings are part of a larger EU-funded study that aims to examine the financial and monetary strategies of Mediterranean states from c. 150 BCE to a major coinage reform in c. 64 CE by providing a detailed and reliable set of analyses of the chemical composition of all major silver coinages of that period.