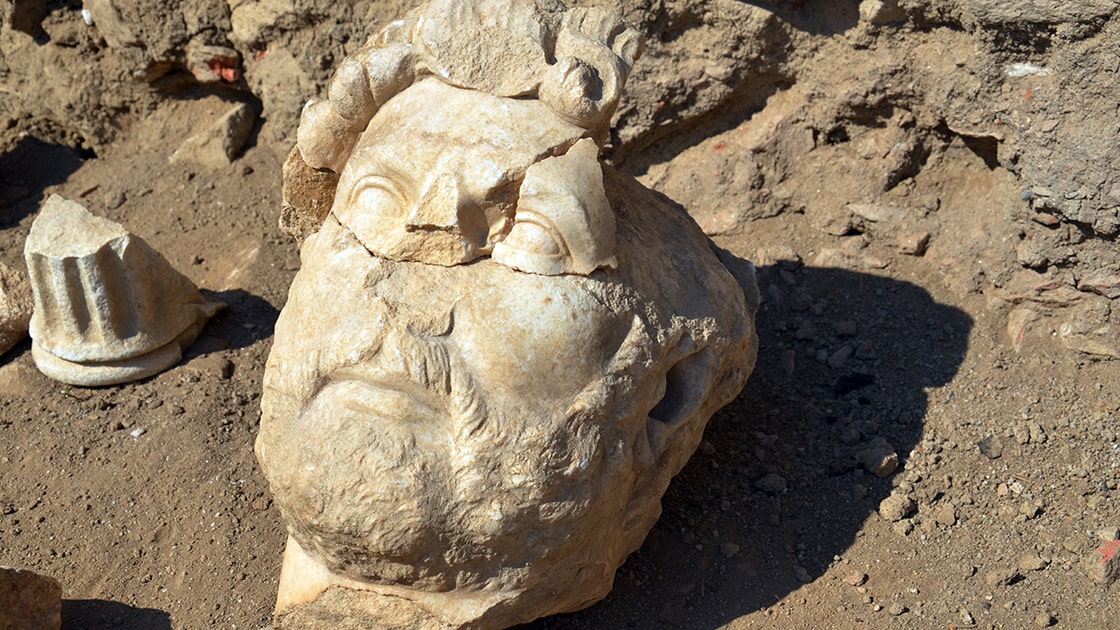 Excavations in the ancient city of Alabanda in the western province of Aydin have uncovered pieces of the statue of Roman Emperor Publius Aelius Traianus Hadrianus.

The ancient city of Alabanda is located inside the boundaries of Doğanyurt village in the Çine District. The term “Alabanda” is derived from the Carian words for horse (Ala) and race (Banda) (Banda). According to Byzantine historian Stephanos, King Kar called the city Alabanda after his son Alabandos won a horse race.

Ali Yalçın Tavukçu, a professor at Erzurum Atatürk University’s Department of Archaeology, is leading the excavations that began in 2015 at Alabanda, which spans 500 hectares and is considered to be one of Anatolia’s largest ancient towns.

Fragments of a marble statue of the Roman Emperor Hadrianus, possibly brought to Aydın in AD 120, have been found at different spots sites during ongoing excavations in the parliament building.

Works are continuing to find the other parts of the marble statue, which has six parts, including some parts of its head and body. After the works are completed, the 2.5-meter-tall statue will be transported to the Aydın Archaeology Museum.

The statue is believed to date back 1,900 years.

“The area, where the statue fragments were found, is the ancient parliament building. It is one of the largest parliament buildings in Anatolia. We care about exhibiting the artifacts on their site. When the statue is completed in the next few seasons, we will probably see many visitors here thanks to this statue, which is rare in the world,” Aydın Provincial Culture and Tourism Director Umut Tuncer said.

Speaking about the find, Tavukçu said, “Last year, we accelerated the work in the billiardium [council building], which is one of the three important regions here. This year we found fragments of the armored emperor statue, which we call ‘portrait sculpture.’ The parts of this statue were found in different places. It will be one of the important artifacts in the museum. Hadrian was one of the emperors in the Roman Empire who visited the country the most. He also had many expeditions to Anatolia. We think that there is an inscription of honor next to this statue, which we think was made for the arrival of Hadrian, who ruled between 117 and 138.”

There are Hellenistic and Roman remnants in Alabanda, including towering walls, a theatre, a senate house, a people’s assembly structure, The Temple of Apollo, an agora, and mausoleums. In addition, on the Kemer Creek in the south, there is a Roman Period aqueduct.