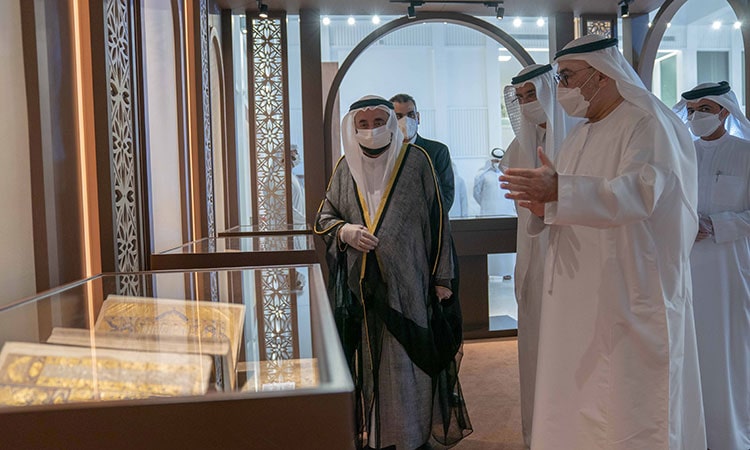 The opening of the ‘Tales from the East’ exhibition organized by the Sharjah Book Authority (SBA) was held with the participation of Supreme Council Member and Ruler of Sharjah, His Highness Sheikh Sultan Bin Mohammed Al Qasimi.

Dr Sheikh Sultan Bin Muhammad Al Qasimi was briefed on the exhibition’s content, which showcases early written material with an estimated total value of over Dhs60 million, including books and manuscripts, as well as a collection of rare artefacts, at its Sharjah headquarters from April 27th to May 3rd, 2021.

Starting Wednesday, April 28th, the exhibition will be open to the public from 20:00 to midnight and will include a series of cultural sessions and panel discussions in which renowned history and archaeology experts will discuss the role of manuscripts in revealing humankind’s scientific and cultural achievements, as well as the importance of their preservation for future generations.

The first edition and first issue of the Description of Egypt, consisting of 23 volumes and illustrated with 935 plates, is on display at the ‘Tales from the East’ exhibition. It was put together through a collaboration between scientists, artists, and technicians who accompanied Napoleon Bonaparte to Egypt.

Visitors will also see the first edition of Katib Celebi’s masterpiece, The Mirror of the World, which was published in Constantinople by Ibrahim Muteferrika in 1732 and features 40 coloured maps and plates, including Ahmed Al-famous Qirimi’s map of the Arabian peninsula. It also includes cosmological astrological models, climate and wind maps, and other components.

Journey to Persia, a book written by orientalist Adrien Dupre and published in 1819, chronicles his journeys through Asia Minor, Mesopotamia, Turkey, Armenia, and Persia.

The exhibition also includes globes dating from the 17th to the 20th centuries, including an exceptional and rare pair of terrestrial and celestial 49cm colored parquet globes by Mattaheus Greuter, which were released in Roma in 1632 and 1636.

The exhibition also includes a large number of vintage posters, illustrated books and atlases, as well as a number of rare manuscripts.