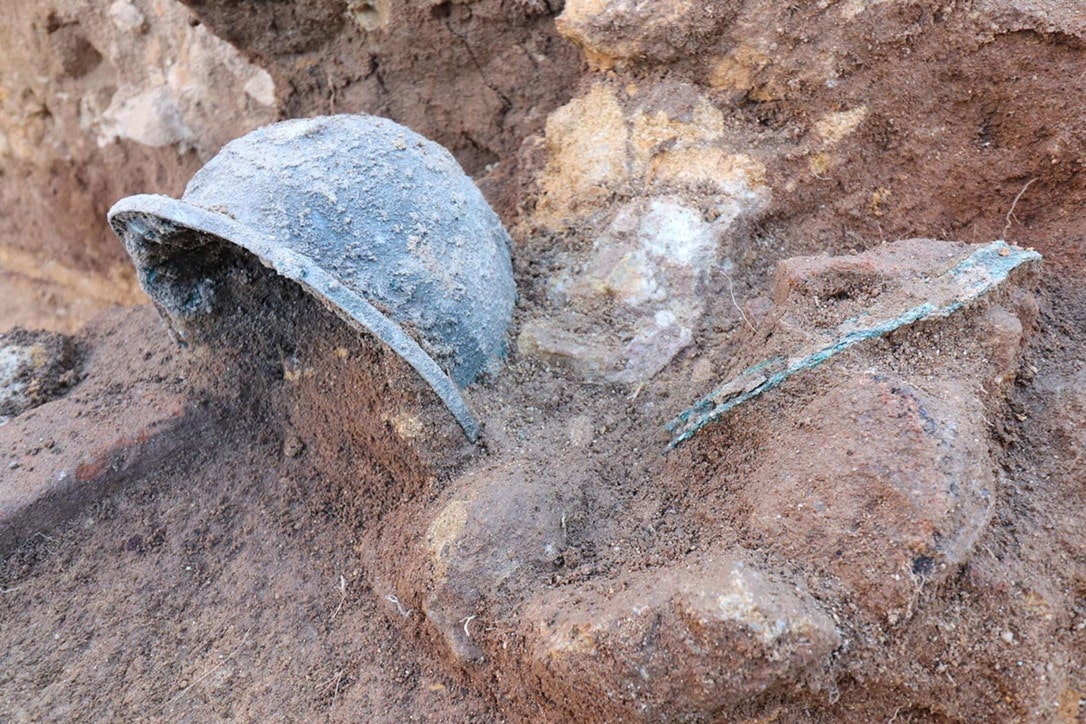 A discovery that “sheds new light on the history of the mighty Greek colony” by Velia.

Archaeologists in southern Italy have discovered ancient warrior helmets and the ruins of a painted brick wall at a site that might have been a forerunner of a temple dedicated to the goddess Athena, officials said Tuesday.

The ruins discovered at Velia, a major tourist destination in Italy, were discovered atop what had been an acropolis of one of Magna Graecia’s most prominent towns, according to Italian Culture Minister Dario Franceschini. Velia is located 40 kilometers (25 miles) southeast of Paestum, a well-known ancient Greek temple site.

Excavations by Francesco Scelza, which began last summer on top of what used to be the city’s acropolis, just below the still prominent remains of the temple dedicated to Athena, have unearthed the remains of a rectangular building of considerable size. (At 18 meters long and 7 wide, it dates back to the sixth century BC.)

In 540 BC, a major naval battle took place off the coast of Corsica between the Phokaians, the Greek colonists who settled in the Corsican city of Alalia, and the Etruscans, who were allied with the Carthaginians. In the conflict, the Greeks understood the situation better but were forced to abandon Alalia and flee to the south of Italy, where they founded Hyele and later renamed Elea (Velia for the Romans).

Velia is famed for being the home of an ancient Greek school of philosophy, including philosophers Parmenides and Zeno. It was part of Magna Graecia, the area of southern Italy colonized by Greek city-states. The settlement at Velia occupied an upper part, or acropolis, of the area as well as hillsides, and was surrounded by a wall.

The recently completed excavation at Velia unearthed a pair of helmets in good condition, the remains of a building, vases with the Greek inscription for “sacred” and metal fragments of what possibly were weapons, the culture ministry said.

State Museums Director Massimo Osanna, who formerly had long directed excavations at Pompeii, Italy’s most celebrated excavated site, said the area explored at Velia probably contained relics of offerings made to Athena, the mythological Greek goddess of war and wisdom, after a key naval battle in the nearby Tyrrhenian Sea.