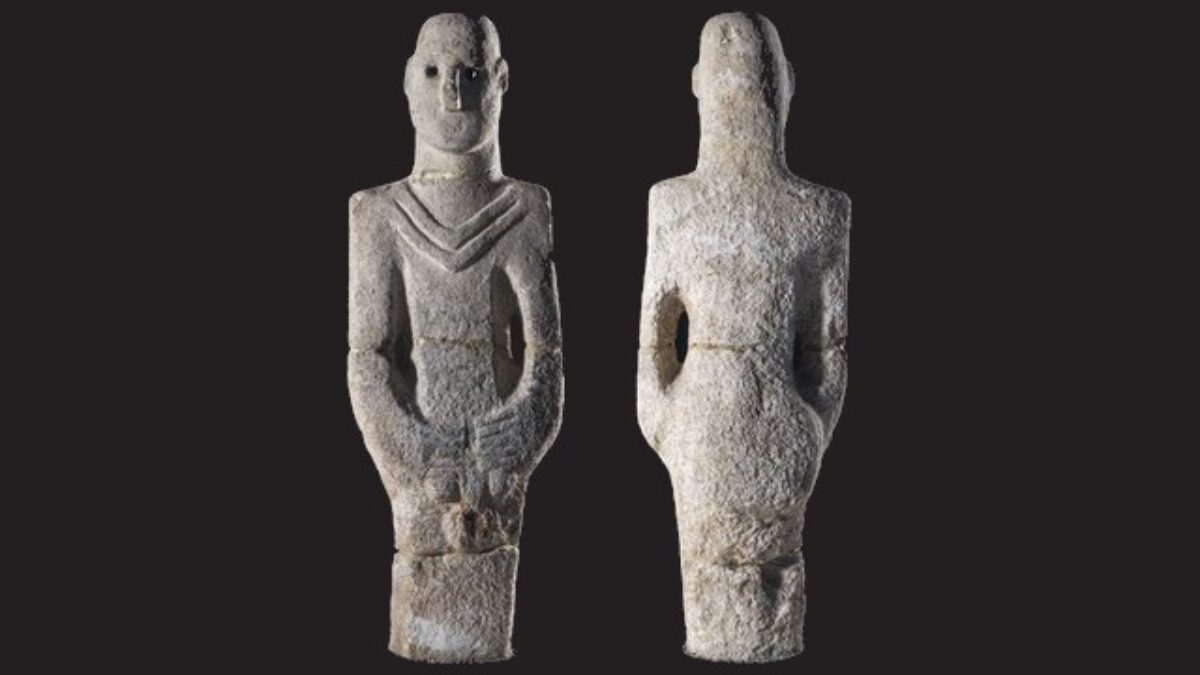 One of the common features of male depictions with similar features found in the region called Taş Tepeler (Stone Hills), located in southeast Turkey, is holding a phallus, either standing or sitting.

The numerous findings of male sculptures and male figurines in the Taş Tepeler region may be an indication of a culture that symbolized the importance of fertility and population.

From the end of the Epi-paleolithic era, human figurines and idols begin to appear, as well as animal figurines found in Anatolia and Mesopotamia. While figurines of animals continue into the Neolithic period, there is a significant increase in findings of human figurines.

One commonality among these male depictions is that the hands join in front of the figure, sometimes holding a phallus, either standing or sitting.

The Urfa-Yeni Mahalle male statue that stands in the Şanlıurfa city center, the male figurine found at Karahan Tepe (Hill), and the figurines found at Göbekli Tepe, Harbetsuvan, Nevali Chori, Kilisik all have similar portrayals of the male form and phallus.

Excavations at the Nevali Chori settlement resulted in the first discovery of T-shaped columns. And among the finds found in the layers of the Pre-Pottery Neolithic settlement identified, there were also some statues of male figures. In addition, thanks to the presence of arm and finger reliefs on the T-shaped column, it was understood that these were stylized male sculptures.

In 1993, during a landscaping project in the Yeni Mahalle area of şanlurfa, a limestone sculpture depicting a human figure with a phallus and no legs, about 1.93 m in height, carved as a column, was discovered by coincidence. This sculpture, which displays arm and finger reliefs, is comparable to the T-shaped pillar in style. The Yeni Mahalle sculpture is the oldest known human-sized statue.

The pillars discovered in the Göbekli Tepe settlement’s III layer, the lowest layer, were dated to 9100 BCE. These pillars, which also stylize humans and stand around 5 meters tall, are formed of monolithic stones and are the first known specimens of this time.

Aside from the pillars which stylize the human form, two styles of statues of the male form emerge. One of them is the sitting male statues, and the other is the standing male statues.

In 1964, the residents of Kilisik Village, located inside the limits of Adıyaman’s Kahta region, gave a T-shaped column to the Commagene Excavation team. Two human reliefs with arms, fingers, and heads may be seen on this stone. What makes this pillar unique is that instead of a phallus, there is a hollow region beneath the bodies of the figurines. It is uncertain if this empty part is original or was added later.

The aceramic Neolithic Period is also represented in a piece of sculpture on exhibit at the Gaziantep Museum. The existence of two facial reliefs, in addition to the arms on both sides, is the most notable characteristic of this statue from an unknown location. The possible area where the phallus will be located at the front of the statue is completely scraped. The sculpture in Gaziantep is a significant example of the shift from the T-shaped pillar tradition to the sculpture tradition.

The man figure discovered at Harbetsuvan Tepesi may be considered as a continuation of Göbekli Tepe’s male sculpting tradition. This sculpture belongs to the same category as the Göbekli Tepe and Karahan Tepe seated male sculptures.

One of the most striking of these male depictions is undoubtedly a scene with five figures consisting of a human, a leopard, and a bull in Sayburç in Taş Tepeler, Şanlıurfa.

In the figures that are thought to be related to each other, there are two leopards with their mouths open on either side of the male figure holding his phallus with one hand. To the left of them, there was a man holding a snake and a bull standing in front of him with his big horns.

Considered to be contemporary with the last periods of Göbekli Tepe, the Sayburç is also one of the Taş Tepes in Şanlıurfa, which consists of Göbekli Tepe and eleven other archaeological sites around it.

The common similarities of all these male statues and male figurines may indicate the importance of population development in this period. In the following periods, this importance may have evolved towards the sanctity of women’s fertility.