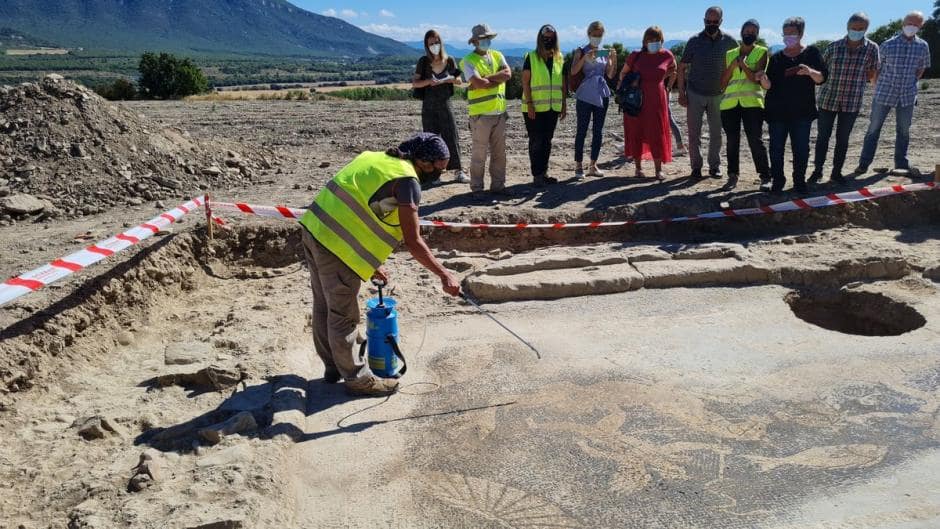 Archaeologists from the University of Zaragoza in Spain have discovered a previously unknown Roman city with buildings of monumental proportions.

The urban complex, which existed between the first and second centuries, had “buildings of immense sizes” as well as public facilities including baths, water supply, streets, and sewers.

Researchers thought the 10-acre site, also located at Artieda, in the Aragon region of northeastern Spain, was home to several separate archaeological sites, including San Pedro and the Rein Hermitage.

In 2018, Artieda City Council asked the University of Zaragoza’s Department of Archeology for help in examining some of the remains found around the San Pedro hermitage, known variously as El Forau de la Tuta, Campo de la Virgen, or Campo del Royo.

And after 3 years of research, experts have confirmed that these sites form one large single archaeological complex. El Forau de la Tuta is the name for everything now, since the team realized they’re all one interconnected city. Until the real name of the city is revealed, of course!

The team published the results of their 3 years of work in a report, El Forau de la Tuta: A Hitherto Unknown Roman Imperial City on the Southern Slopes of the Pyrenees.

The team detected two phases of occupation on the surface of the site: one during the imperial Roman period (the 1st to 5th centuries) and another during the early-medieval Christian era (the 9th to 13th centuries).

The researchers discovered two streets, the whispers of sidewalks, four rudimentary cement sewer outlets, one life-sized marble hand of a presumed public monument, and even the reception room of a thermal bath—complete with mosaics preserved by the collapsed sandstone ceiling. They did this by combining remote sensing techniques like georadar and aerial images with conventional methods.

This magnificent find features two cupids riding seahorses and is decorated with shell and scallop designs.

The report states that the settlement was “of urban character—the city’s name is currently unknown—and it developed during the [Roman] imperial period”.

The researchers also learned that the settlement had another life as a rural habitat during the Visigoth and early Andalusian periods. A medieval peasant village sat atop the Roman ruins from the ninth to 13th centuries.

The El Forau de la Tuta location lies 1.5 kilometers from Artieda’s city center, in the lush Aragón River plain. It is located within a 390-meter long and 140-meter broad agricultural area. It is four hectares in size, but it’s likely that the site is significantly bigger and that it encompasses other, as-yet-undiscovered agricultural areas.