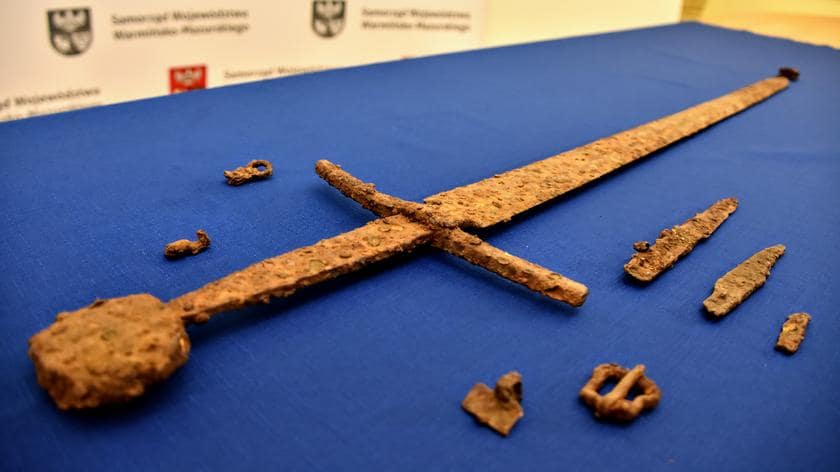 Aleksander Miedwiediew, a history buff, and detectorist discovered a bare sword, a sheath, and a knight’s belt with two knives attached, all of which most likely date from the Battle of Grunwald. The objects were sent to regional authorities by the finder, who then passed them on to the Battle of Grunwald Museum.

The Marshal’s Office of Warmia and Masuria informed about the finding on Thursday, saying in a statement that “such findings happen once in decades”.

“It’s a phenomenal set of a sword, a sheath, a belt, and two knives. Taking into account that these artifacts date back somewhere between 14th and 15th centuries, and thus spent approx. 600 years below the earth, they have been preserved in an exceptionally good condition” – said the finder of the items Aleksander Miedwiediew. He added that in the times of their origin, such items had been extremely valuable – their price would match the price of a car today.

Miedwiediew found the items near Olsztyn. The exact location has not been revealed, as the director of the Battle of Grunwald Museum Szymon Drej said preparations for archeological exploration of that area were ongoing. “It’s puzzling that no one had taken hold of these items, very precious at the time. Maybe we will find the remains of a knight whom these things belonged to” – Drej added.

The finder of the weapons took them to the Marshal of Warmia and Masuria Marek Brzezin. The marshal passed the findings on to the Battle of Grunwald Museum where they will undergo conservation.

“The weapons will now undergo conservation and research process. We have a theory as to the sword’s medieval owner’s status, and we’re curious what’s underneath the layer of rust” – Drej added.

Other sensational discoveries have been made by Aleksander Miedwiediew. During his annual archeological study at the Fields of Grunwald in the fall of 2020, he discovered two perfectly preserved battle axes. They were taken to the Grunwald Museum.